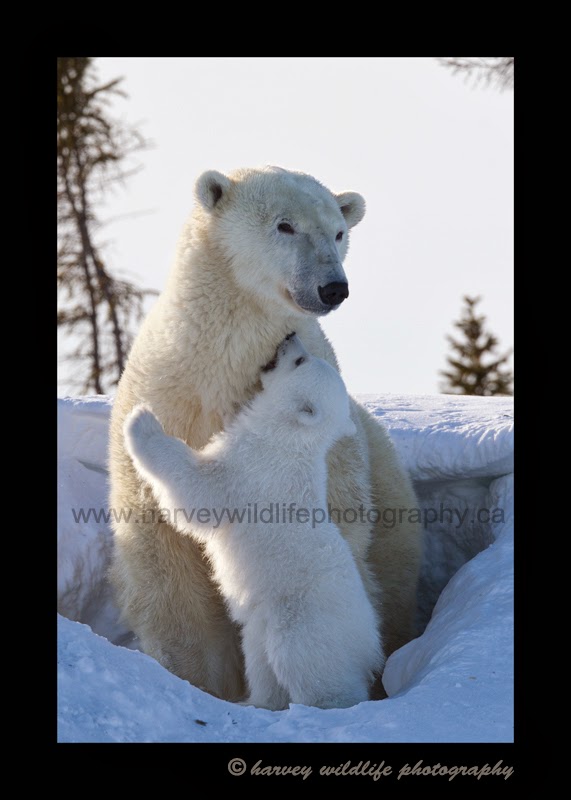 Today the temperature warmed up to 0 degrees. The cub came out again and all was good until we looked at our images. Across the board 20 photographers had blurry images. The cold of the snow hit the warmth of the air and it created a heat shimmer and all of our images were “soft”.  They may be acceptable for a photo album, but not even close to the tack sharp images that we are looking for. Thankfully in the evening the weather cooled down and the mother and cub came out for a few minutes to check us out. The light wasn’t great, but it was nice to see them interact for a couple minutes so we could get a few images for the portfolio.

My images polar bear cub images from this safari can be found on my wildlife photography website.

Day 6
Today we had a blizzard. The bears didn’t come out of the den. For that matter we aren’t even sure that they are still there. It was in the -40’s with a really strong wind. Hopefully it will clear up for tomorrow.  Today I spent the entire day in the van. Even if the bears did come out, I wouldn't be able to get clear images through that blizzard anyway. The video however shows just how miserable it was today.

Day 7:
No bears today. The den we were photographing the bears at was completely blown over. As it turns out the bears had left before we got there on day five and we were staring at an empty den in the blizzard all day. Today we drove around and opted to come home early. There is a den to the south on Luvit lake but it is 8 miles away and will take 90 minutes to get to. 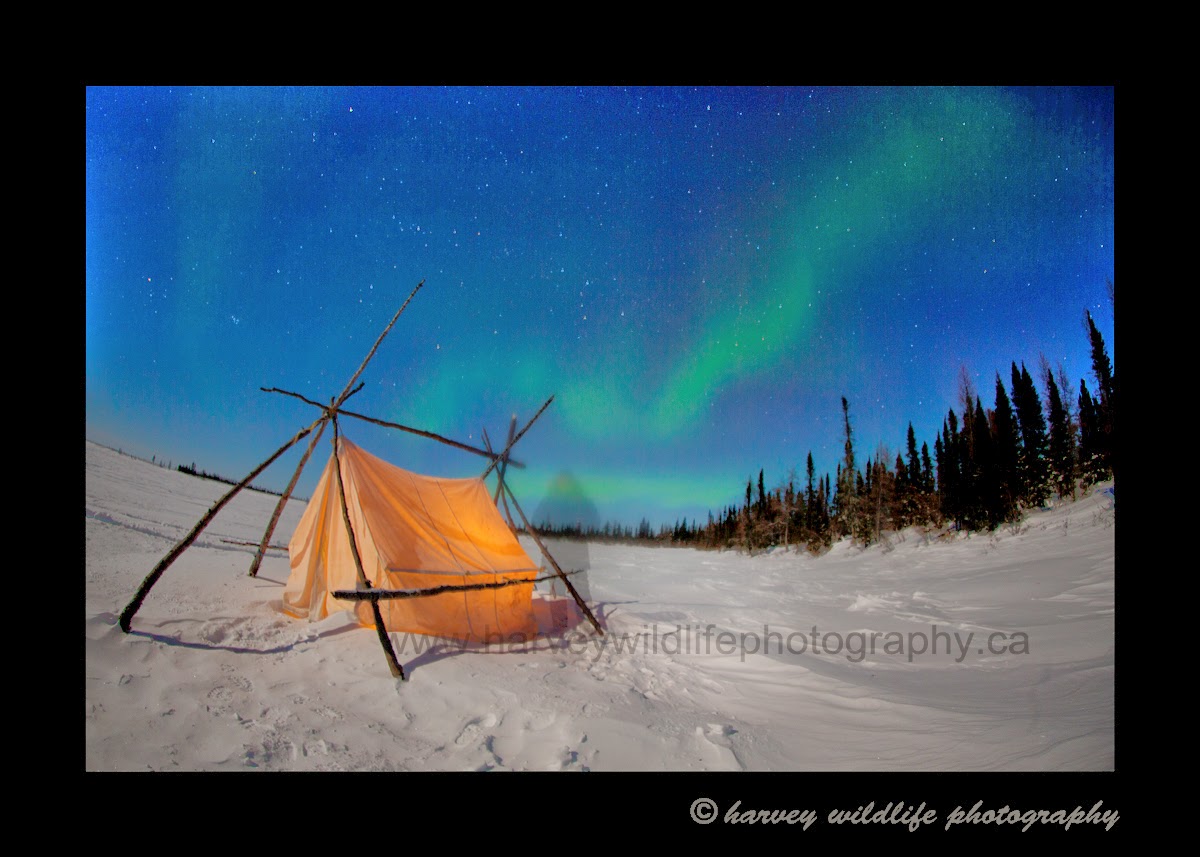 Day 8:
The lunch bus broke down so we all piled into three vans and headed out. We traveled an hour and forty minites to the den site on Luvit Lake. At the den the mom peeked her head out for a couple seconds twice and the cub peeked out for a few seconds three times as well. We are hoping there are at least twins in that den. We’ll see.

Day 9 and 10 consisted of pretty much the same thing. An hour and forty minute drive out to the den, an hour and forty minute back from the den and 8 hours of staring at a hole in the snow in between. On day 9 when we came back and noticed that there were no footprints in the snow I had a sinking feeling that we were going to have a couple unproductive days. I would suspect that the other photographers may spend a few more days just staring at a hole in the snow with the ocassional “peek-a-boo”. The good news for them is that the bears have a long way to travel from that den site, so they may be able to catch up with her again at some point after she leaves her den.


The day after we left the other photographers only saw a couple short peeks from the mom or cub. There still hasn't been word on how many cubs are in that den.

Partly due to the lack of polar bear sightings, I went out each evening to check on the northern lights. I had some success and they too are on my nature photography website.
Posted by Fit N Well Inc. And HW Photo & Safaris at 4:13 PM No comments: 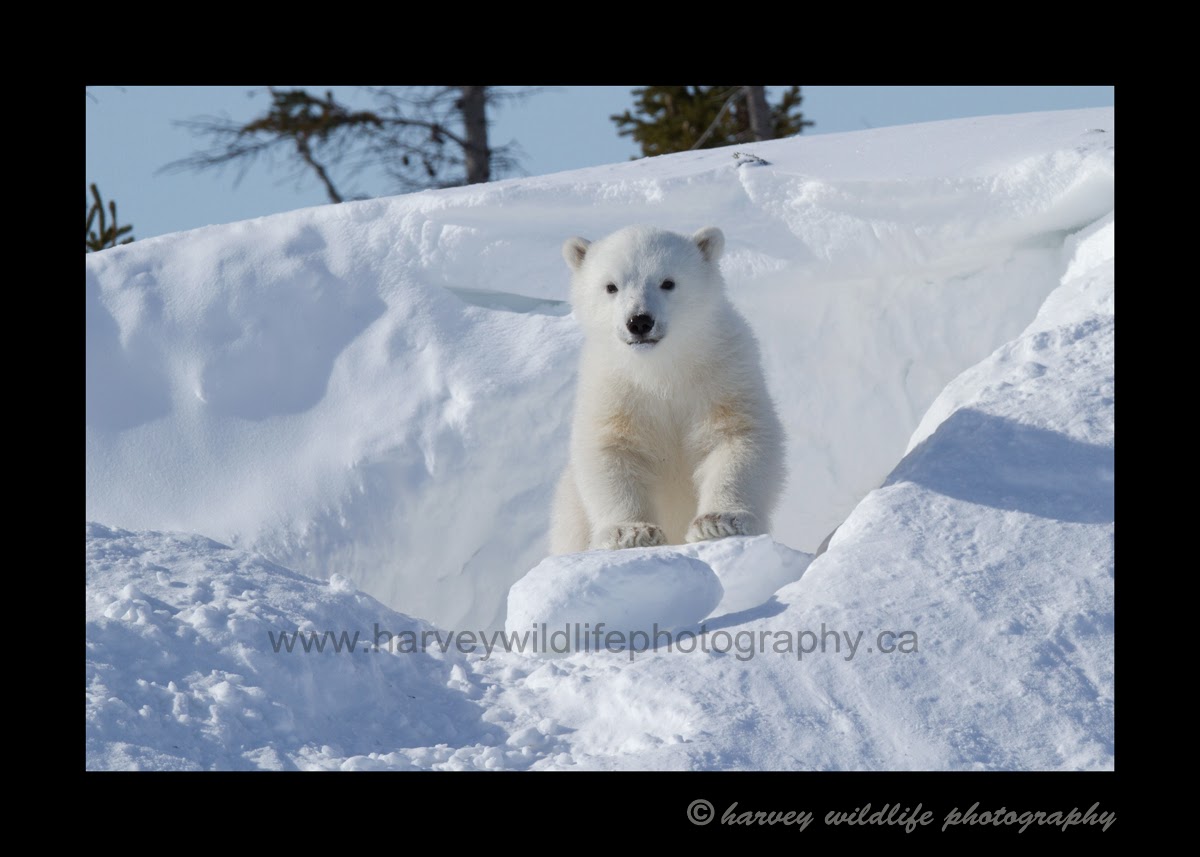 Today we went back to the den with one cub. She popped out briefly in the morning for a few seconds only showing her eyes and head. At 3:08p.m., the same time as yesterday to the minute she came out of the den. She came out and went back in probably 15 times over the next hour. She was really cautious and would look over the bank of the den, then eventually built up the courage to venture out on top of the crest of the den temporarily, then ran back down as if to say “Oh, that was scary!”. Over the next hour, she developed more courage to venture out a litlte bit more for a little longer each time. 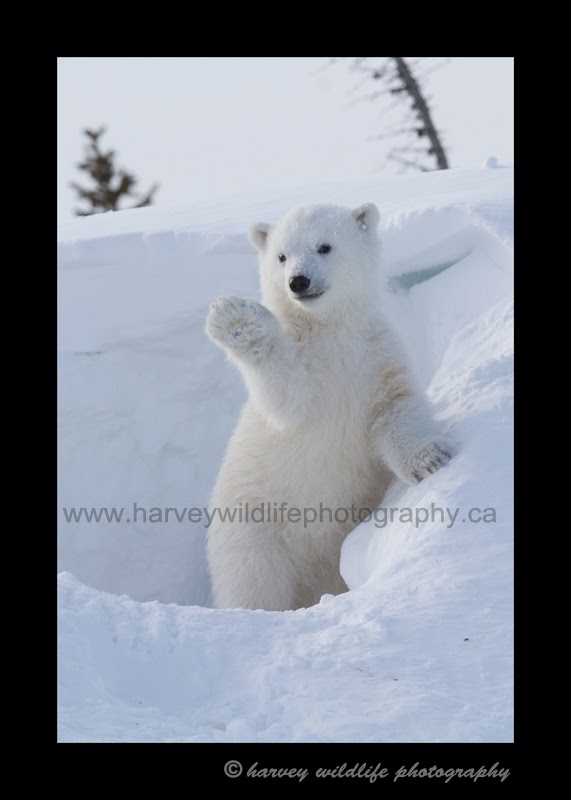 At midnight we went out to photograph the northern lights. They were quite nice! I’m looking forward to trying again though with the lessons I learned from my first northern lights try of the year.
For more images from my polar bear safari or others you can visit my wildlife photography website. 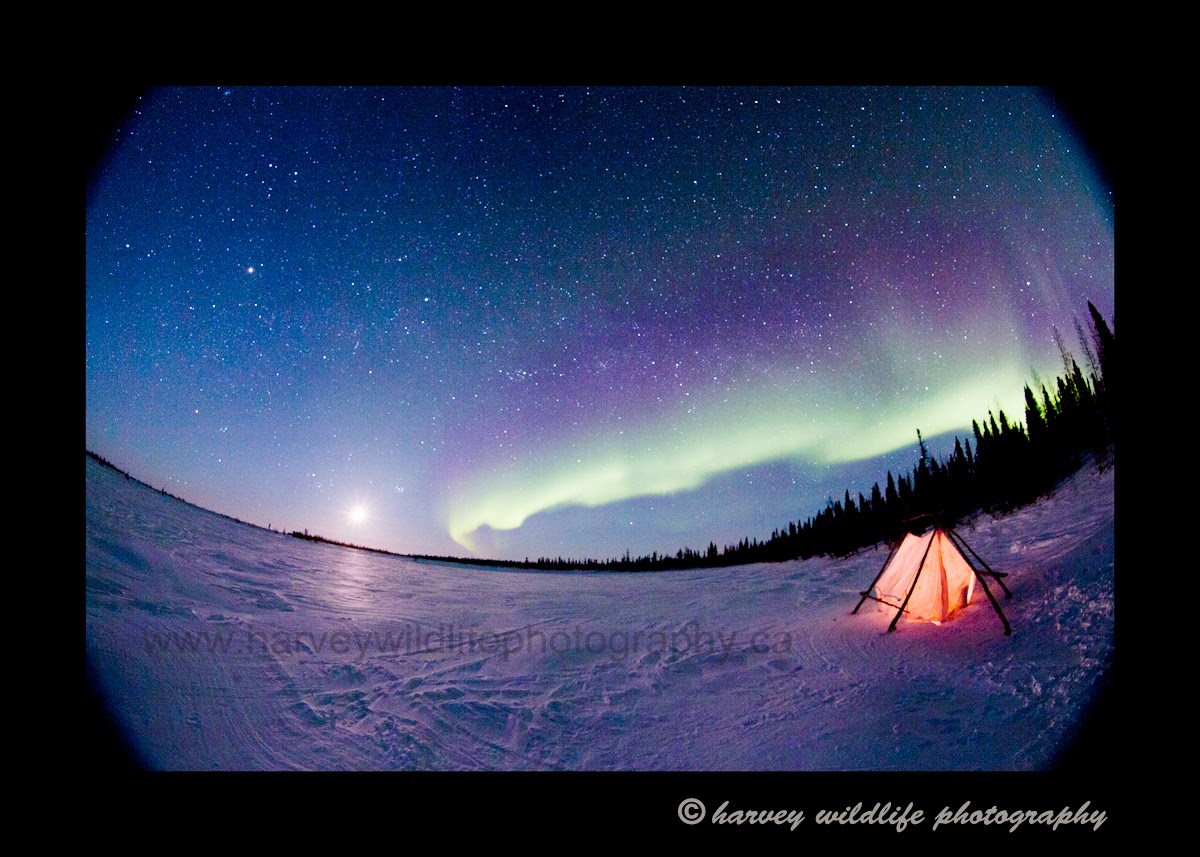 Polar Bears; Moms and Cubs Day One…
Today the trackers looked for the mom and cub that they saw yesterday. It didn’t require much tracking as the bears only went a couple hundred yards from the maternity den. Mom dug a day den and they slept for most of the day. At around 2p.m. mom popped her head out briefly then the baby popped out for a few seconds about three times throughout the day. And that was the day. The little gaffer is cute and clean and apparently the mom is clean and healthy looking too so hopefully we will get a better look at them tomorrow.


Researchers flew over the entire area a few days ago and haven’t seen so much as a track. Hopefully that just means they are still in their dens. It was really warm today. It warmed up to almost 0 degrees Celcius and at the coldest was     -18 plus a windchill, so probably -25ish. Pretty balmy for here. It was so nice that I had a nap outside beside my tripod while waiting for some action. It is supposed to start getting a little colder again tomorrow. Some people have a hypothesis as to why they aren’t seeing a lot of bears right now, but I think it is just timing. My guess is they will start coming out in the next few days, but time will tell. "They" think there just aren't any bears this year. I believe that change doesn't happen that quickly one year to the next. They have 9 more days to prove me wrong.:)

Tonight I will check out the Aurora Borealis. It was a little cloudy driving in tonight, so the odds of good opportunities may be slim, but midnight is still four hours away so there's still time to clear up. Here are a few aurora borealis shots from previous years...
Posted by Fit N Well Inc. And HW Photo & Safaris at 7:41 PM No comments: