One of my clients told me about a fox den near his place. Apparently foxes have been raising kits across the road from his house for several years. I went out to the den four times this year and photographed this little guy every time. Although he had two siblings, they both died, so now it's just him.

Last week a photographer friend of mine had commented on a picture that I had posted on Facebook. He was sitting at his breakfast table in Ontario thinking how he had never photographed a fox before. Later that day he contacted me via Facebook. He had forgotten that I lived in Edmonton and was on a lay over on his way up North to Cambridge Bay. I told him that we should get together and that I would be finished my work day at about 7:30p.m. I suggested that we should go to the fox den. Seeing as my friend was on a lay over and was staying overnight, he was happy to oblige. His only reservation was that he thought we were going to a strip club. I laughed and explained that the fox den is an actual fox den. Anyway, I got off work, and rushed out to pick him up.

The weather was awful and I wasn't sure how to get to the den from his hotel out in the boonies, but he figured a drive in the country would beat a night alone in a smelly old hotel room, so off we went. As we drove the clouds got darker and meaner looking until it started to rain on us, but we persisted on. An hour or so later we managed to not only find the den, but we drove through the edge and around the storm and ended up on the other side. Miracle of miracles, the light was absolutely perfect at the den. I parked the car and within about 15 seconds of me pointing out  the fox den, the fox came out and posed and played for us for about an hour.

After we lost the light, we packed up the car and he still stayed out and watched us. This was an amazing sighting. As a fellow wildlife photographer he is the first to understand that just because you find a den, it certainly doesn't mean that you are going to have a sighting. Despite bad weather, a directionally challenged driver and a small time frame in which to see the animal we were looking for, we managed to photograph him for about an hour, so we  were both ecstatic about our sighting and later equally happy with our images. 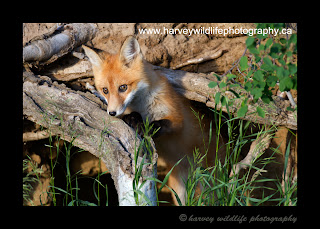 Pictures from my visits to the den can be found here on my wildlife photography website. I actually know where two red fox dens are now, so I am looking forward to next year. Hopefully I will get some cute pictures of them at a younger age and some sibling shots of two or three of them posing and playing together would be fantastic!

This weekend we are off to Waterton National Park for a short photoshoot. We will be looking for deer fawns, black bears and on the Montana side; mountain goats. Hopefully we will find some mountain goat kids too. I should have some blogs published starting Friday night.