The Ultimate Indian Faux Pas…
There is always a story with me. This time I don’t know what my excuse is. Maybe it was because I arrived in at 4a.m., then just a few hours later headed out on our Agra excursion or if it was because I hadn’t eaten in so long or the heat? The lack of sleep? The crazy drivers in ? Or maybe I can blame it on a little culture shock? Or perhaps all of the above. Regardless, I definitely committed the ultimate faux pas in .
We drove for hours in bumper to bumper traffic. Cars and trucks were constantly honking, the smog is unbelievably bad and it seems that everywhere you go there’s wall to wall and curb to curb people and vehicles. It is stressful witnessing near accidents so regularly. Traffic lights, one way streets and painted lines on roads are merely suggestions. I don’t even think they know why there are street lights, lines or stop signs seeing as I didn’t see anyone adhering to any of them. I think they just figure they are for mere decoration. 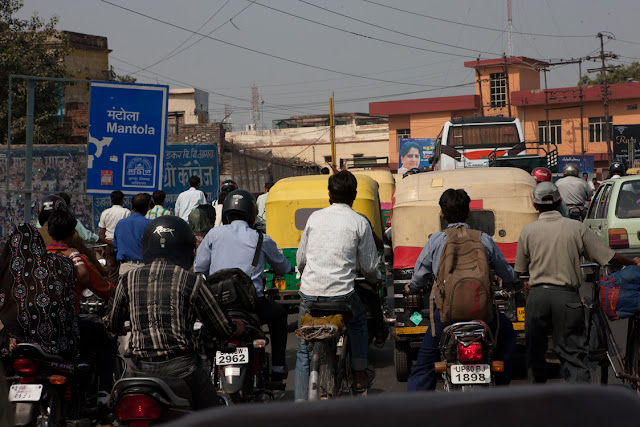 So, I am low on sleep, low on sugars and trying to gain a little rapport with our driver. We are chatting about their festival Dariwal, he tells me about how much Indians like to move to , he answers my various questions quite politely and we discuss his religion briefly as we pass by various mosques. It was then that my hunger started really getting the better of me. I was light headed, feeling a little weak and queasy and we were still several hours away from in bumper to bumper traffic. So what do I do? I of course get a snack out of my bag and start munching. I couldn’t possibly imagine being rude to my new friend. He is busy driving in the nastiest traffic you could imagine, so I offer my bag of food by putting it up near his face so he can see it. Nice right? I’m hungry, he’s probably hungry. He’s busy with both hands on the wheel, swerving, and honking etc. But what do I offer him?…BEEF JERKEY!! I am such a fool!! Cows are sacred to Hindus. Reincarnation ring any bells?!! I may as well have been eating his ancestors in front of him. Then I ask him if he would like to share them with me! Insult to injury I had to hold the beef jerkey up near his face so he could get a good wiff of it! As I was offering, Chris; one of the other photographers was trying to say “No”, but she was just a little bit too late. I had already practically shoved my dead sacred cow in his face.
Okay, the beef jerkey thing was not the highlight of the day, but it was just weird all around. I saw several people urinating or bathing in the street, entire families of 4 or 5 on motorbikes, babies sitting on mom’s lap as dad swerves the bike in and out of traffic without the appearance of anyone other than the driver actually holding on to anything. We saw a lot of things for sale along the side of the road, the most common being motorbike helmets. Ironically though, we only saw a handful of people actually wearing helmets.
We finally got to late, took a few pictures of the Taj Mahal in bad light from across a mostly dried up river then drove an hour back to the hotel that is located ten minutes away. Supper was good though and I’m really looking forward to sleeping in a bed tonight!! Tomorrow’s another day. I will try not to exchange beef recipes with my Hindu friends. I did apologize, but somehow an apology just doesn’t make up for eating their sacred animal, then offering them a taste!
Posted by Fit N Well Inc. And HW Photo & Safaris at 6:08 AM