Taj Mahal
After traveling all day we finally made it to . The light was perfect and we were excited to check it out. Once in Aga we hit the heavy traffic again and watched the sun starting to set as we were once again in bumper to bumper traffic. We finally got out to “The Garden” and there were no flowers, the river was mostly dried up and it really wasn’t attractive. I was thinking “really? This is all the rage? The seventh wonder of the world? What the heck is the hype all about?” So it’s off to the hotel. What a first day. We spent the whole day in the most miserable traffic imaginable, we miss our sunset and the pictures are brutal!
Taj Mahal day two…


The ladies arranged for us to get to the Taj early before it opened and what a great idea that was! We were there 30 minutes early and there was already a line up of easily 60 people. Security there is very tight at the Taj as Taliban groups have been caught twice plotting terrorist attacks on the Taj Mahal. We weren’t allowed to bring in any shutter release cords (as they look like detonators to the security guards) and no tripods, no backpacks and no food. Once inside it is obviously pretty stunning. 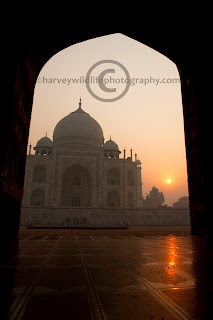 Moments later a guy grabs me and shows me the exact spots to stand for the best pictures. I give him 30 rupees and thank him. I thought that would be the end of it as the picture views were very good. By the time I tried to get back to my group, I couldn’t find them. Meanwhile he is dragging me all over the place. “Stand here and shoot there. Now stand over here and look there. Lay down on your stomach here.” I took some pictures and gave him another hundred rupees. (About 2 bucks. I didn’t have any more change). I thanked him and tried to get back to my group. At this point I had paid him way too much. He told me not to worry, he claimed that he knows where they are (of course I know he is full of it, but he shows me the sunrise and insists I follow him) “Hurry, hurry” he insists. Well, I don’t have anything to lose. I couldn’t find my group anyway and there was a sunrise. He took me to the exact spots with the best views of the sunrise behind the Taj Mahal. The tiles that he had me stand on are dirtier than the others. Clearly he had done this before…like every day! I gave him half of what he was asking for and he still made out like a bandit and made about $15 which is crazy considering most people would have made about $1 or $2 tops for those services. Finally I met up with someone from our group and she is with another guide doing the same thing. I tried to show her the spots he showed me but the sun had changed and opportunity was over. From there we spent time photographing adorable Indian toddlers and Indian families in the most perfect light with the perfect background.
Feeling guilty we looked for the rest of the group. As it turned out, I may have overpaid my guide and they tell us not to over-tip. He will eat well for the whole month, but he earned it. I think I got some great shots, so I certainly have no regrets.
My one regret was that once again while we were racing around like maniacs trying to find the perfect pictures, I noticed that there were headphones and tour groups. I may have gotten some great sunrise shots, but I don’t know anything about this place. Thankfully, our guide has a degree in Indian history. He told us the entire story of the Taj Mahal with such passion. I don’t think any tour leader or recording could have come close to as good a job as he did. He had us fully engaged and completely interested in his story. I was almost teary eyed and simply blown away once I heard the story. From the reason it was built to the fact the Taj closes to the public every Friday so 2000 workers can clean and provide maintenance on it one section at a time. The city of even re-located all of their factories as the pollution was causing the marble of the Taj to get dirty and hard to clean. The Taj Mahal is really is ’s treasure and one of the worlds most amazing wonders!
I will have to order a good coffee table Taj Mahal book when I get home. (I don’t have room for anything extra with all of my camera gear) and I will butcher the history of the Taj, but will try to summarize the story briefly.
From a photographers’ perspective, the Taj Mahal is amazing for architectural and lighting reasons.
As the sun rises and sets, the Taj Mahal lights up differently, accentuating different parts of the monument and grounds. It is simply amazing!


In case you didn't notice my links, you can see images from the Taj Mahal here. You can also see images of the people at Taj Mahal here.
Heading for home, I kind of had to laugh at myself. Yesterday I was annoyed about the crazy slow congested traffic with the incessant honking that just never ends. This afternoon on the way back, I was relaxed with out a care in the world. We came very close to getting in to two accidents, came very close to hitting a pedestrian at least twice. We saw the effects of three accidents and yet I was completely relaxed. It is amazing how quickly our senses adjust. There were as many starving cows eating garbage today as there was yesterday, we still saw dead animals on the side of the road, the honking, congestion, dirt and garbage was still everywhere, but it doesn’t take long to dull your senses and get used to it.
Posted by Fit N Well Inc. And HW Photo & Safaris at 6:37 AM